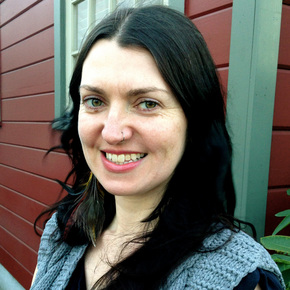 Karin Cravotta is an aspiring singer/songwriter/poet originally from New York. She was raised in a household of creative individuals who shared a deep appreciation for music and the fine arts and who provided her with a diverse musical education. Her mother was a professional dance instructor with her own studio, exposing Karin to both classical and pop music. Her father was a passionate rock and roll fan who primarily listened to Doo-Wop, Motown, and other Oldies But Goodies. Her grandmother was a painter with an affinity for piano music, while her grandfather blasted the sounds of the Big Band/Swing era from his wood workshop in the basement. Her older sister introduced her to bands as diverse as Led Zeppelin and Depeche Mode.

Upon moving to Brooklyn after college, Karin studied jazz vocal and gospel training at the Brooklyn Conservatory of Music and performed weekly with the St. Francis Xavier's church choir in Park Slope. Also while in Brooklyn, she taught herself basic guitar and began writing folk songs. In 2009, Karin spent a year in North Carolina. Heavily influenced by the landscape and both its musical and nautical history, she composed an album of original "old school-style" country songs entitled Pitstop and an album of songs based on selections from local folklorist Charles Harry Whedbee's vast collection of short stories, entitled Of Wave & Wind. In 2010 she relocated to Portland, attracted to the intimate and collaborative environment of the city's artistic community. A former student of Daniel Buchanan's, Karin joined the Resound NW team in the summer of 2014 as Studio Administrator.

She is currently working on several writing projects, including material for a soul-inspired album, a political fiction novel and a rock opera based on Beverley Cross' 1981 screenplay Clash of the Titans. She is also planning to publish a book of Elizabethan sonnets.