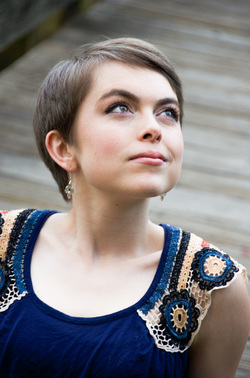 ﻿Madeline “Maddy” Ross, soprano, graduated with honors from Willamette University in Salem, Oregon, with a Bachelor of Music degree in Vocal Performance and a German Language minor.

A native of Portland, Oregon, Ms. Ross studied voice with Allison Swensen-Mitchell and teaches theater at Northwest Children’s Theater and School. In her time at Willamette she performed the roles of Frasquita in Bizet’s Carmen, Mary in Simon and Norman’sThe Secret Garden, and Susanna in Mozart’s The Marriage of Figaro. Other roles include First Witch in Purcell’s Dido and Aeneas (Astoria Music Festival) and Dew Fairy and Sandman in Humperdinck’s Hansel und Gretel (ViVaCE).

Maddy is an accomplished concert soloist, having performed Bach's "Nun komm der Heiden Heiland" with the Willamette Chamber Choir as the Soprano Soloist, and most recently Bach's Christmas Oratorio IV as the Echo Soloist with St. James Lutheran's Bach Vespers. She has received honors and awards from the National Association of Teachers of Singers (NATS) Cascade Chapter Competition and was the winner of the Willamette University Chamber Orchestra's Concerto-Aria Competition in 2012. Maddy was also awarded the Brenna Hazzard Vocal Scholarship through Mu Phi Epsilon, the international music fraternity, of which she is an alumnus. Miss Ross has participated in master classes with Wilene Gunn, Julianne Baird, The Rose Ensemble, and Ruth Ann Swenson. She is an experienced choral and jazz performer and soloist studying under Paul Klemme, Wallace Long, and Anton Armstrong. She currently sings as a soprano assistant Section Leader at First Presbyterian Church, where she also directs their Young Musican's Choir, and is excited to be teaching voice with Resound NW! She plans to pursue a Masters in Vocal Performance in the not so distant future!﻿