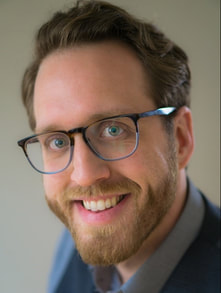 Photo by Carole Montarou
Nicholas Meyer, baritone, is a diverse singer who maintains an active singing and teaching career in Portland, Oregon. As a voice and piano teacher, Nicholas has taught thousands of lessons, working with professional singers, hip-hop artists, public speakers, treble voices and teenagers, karaoke enthusiasts and more. Nicholas creates an encouraging environment and caters his lessons to the unique needs of each student. Employing his extensive classical music training, Nicholas thrives in teaching all styles of music and every experience level, from beginner to advanced.

Nicholas served as Artistic Co-Director of Opera Theater Oregon for a number of years, where he produced and performed in critically acclaimed opera productions. In September of 2017, he made his debut performance with the company, creating the role of John Muir in its world premiere production of the environmental opera Two Yosemites.  Nicholas was praised by Oregon ArtsWatch for his "whiskey-smooth baritone" and that he "interpreted [Muir] to perfection."  NW Reverb wrote "Meyer’s beautiful mellow baritone was at its best in the upper range."  Nicholas made his directorial debut with OTO in 2018 in their production of The Little Prince.

Nicholas has been featured in performances at the Aquilon Music Festival, Astoria Music Festival, Oregon Bach Festival, Manhattan School of Music, Arlene Schnitzer Concert Hall, Friends of Chamber Music, and The Franz-Schubert-Institut in Austria. Operatic credits include Figaro (The Marriage of Figaro), Tarquinius (The Rape of Lucretia), Papageno (Die Zauberflöte), The Stranger (Martin's Lie), Indiana Elliot's Brother (The Mother of Us All) and covering the principal role of Beaumarchais in Corigliano’s Ghosts of Versailles.

TESTIMONIALS
“Nicholas has a genuine love of music and singing which he expresses both in his teaching and his own performances. One thing that makes Nicholas really stand out as teacher is that he really listens to his students and to their voices. Nicholas has focused on freeing my natural sound and developing better resonance through proper placement. Rather than feeling frustrated or self-conscious about having a “difficult” voice, thanks to Nicholas I’m discovering my unique instrument!”
— AUGUSTINA RAGWITZ, VOICE STUDENT

“As a singer-songwriter who recently parted ways with her pianist, I needed to figure out how to accompany myself while performing. Piano was always something I wanted to learn, so when I found Nicholas, I was ecstatic. In just a matter of months, I accompanied myself at my first recital! And with less than a year of lessons under my belt, I’m now recording piano tracks for my EP. I would recommend Nicholas to anyone interested in learning piano. ”
— NATALIE LYNN, SINGER/SONGWRITER

“Nicholas is a patient, encouraging and positively-spirited instructor who instills confidence and enthusiasm in his students. His classes are invigorating and therapeutic. I look forward to each and every lesson. Wish I had started taking these classes years ago!”
— DAVID DEUTSCH, VOICE STUDENT