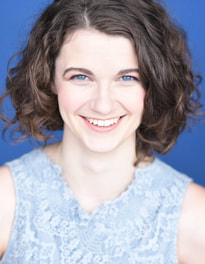 Voni Kengla is teaching artist, actor, singer and creator born and raised in Portland. After being a music student at Resound NW for many years, she received her Bachelor of Fine Arts in Musical Theatre from The Hartt School in Hartford, Connecticut. After graduation, she moved back home to Portland and was selected to join the Portland Playhouse Apprentice Company as an Acting Apprentice where she continued her artistic training.

In the summer of 2021, she wrote and performed a one-woman musical called “Space Girl” about a scientist who gets the chance of a lifetime after encountering a magic spack rock. Voni is passionate about teaching acting and creative expression and has taught theatre classes and camps for all ages. Selected theatre roles include Daisy Buchanan in Great Gatsby’s Daisy, Meg in Tinderella (PNW Premiere), Shirley Temple in Bojangles of Harlem, and Rifkele in God of Vengeance.

She can often be found with a ukulele in her hands sharing her love of music, silliness, and imagination with budding artists.  Follow her theatrical journey at vonikengla.com